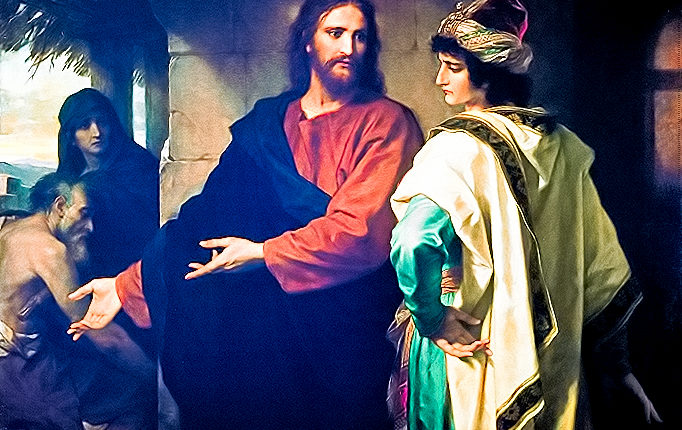 Redazione-The past few weeks have been a series of one tragedy after another for faithful Catholics.  There were the reports of McCarick’s crimes, the shocking contents of the Pennsylvania grand jury report, and now Archbishop Vigano’s letter.

As the news ferments on social and traditional media, two reactions predominate.  One response to the news has been calls for an end to the discipline of priestly celibacy, some of which come from people considered to have expert status on the issue, such as Richard Sipe.  Those issuing the calls argue that demanding priests live unmarried presents temptations to which many cannot help but give way; abandon celibacy, they suggest, and clerical abuse would plummet.  The alternate response has been a call for penance: penance, especially, for the priests and prelates involved, but also voluntary and expiatory penance by the faithful.  Various groups and individuals encouraged each other to fast in August; now, many of the same individuals are also calling for a full investigation of the charges in Vigano’s letter.

The two reactions to the issue of celibacy raised by these stories are even more at cross purposes than they might at first glance seem.  It is not merely that these attitudes happen to be associated with different poles of the Catholic religious spectrum.  These reactions are logically as well as coincidentally opposed; each comes deep from the heart of its respective group’s beliefs about human nature.

The liberal calls for an end to priestly celibacy result from an anthropology that sees human beings as distinctly finite in their animal nature.  In the secular world, this anthropology manifests itself in various ways: in a tendency to reduce sin to disease and disease to difference; in a pseudoscience that attributes every beneficial human trait to evolutionary activity; and in a dangerous belief that people who act badly most often cannot help themselves.  Willpower, according to this way of thinking, is a limited resource.  Skip the donuts on the office counter, and it will be harder to finish that report by noon.  Turn in the report, and it will be harder to pass up the fries with lunch.  Pass on the fries, and you’ll almost certainly find yourself on social media in the afternoon.  Trim back on that social media consumption, and you’re liable to find yourself with a bad case of road rage on the way home.  Restrain yourself on the highway, and there’s no way you’re not yelling at your wife when you walk in the door.

Pretty bleak, isn’t it?  And with this understanding of humanity, it’s no wonder many people are arguing that priests who can’t be married are bound to stray.

There is, however, an alternate explanation of how willpower works.  It explains how some people manage to accomplish insane amounts of hard work, or to remain miraculously pleasant after the dishwasher broke, the baby didn’t nap, the toddler threw his food on the floor, the mailman brought another hospital bill, and the neighbor’s boombox is going again.  (Who, me?  I wish!)  This alternate understanding of human action dates all the way back to Aristotle and was baptized and adopted by Thomas Aquinas, who deals with the topic in Summa 2.1.49-54, commonly called “The Treatise on Habits.”  Here, Aquinas makes clear the relation between good actions and willpower, and the intermediary role played by habits and virtues (which are a particular kind of good habit).

… “Like acts cause like habits” ([Aristotle,] Ethic. ii, 1,2). Now things are like or unlike not only in respect of their qualities being the same or various, but also in respect of the same or a different mode of participation. For it is not only black that is unlike white, but also less white is unlike more white, since there is movement from less white to more white, even as from one opposite to another, as stated in Phys. v, text. 52.

Aquinas’s text is, as usual, clarified by additional examples.  Take for instance the example of a monk who has a habit of frequent fasting.  If he fasts in a given week as much as usual, or more often, he has strengthened the habit of fasting (“if the intensity of the act correspond in proportion to the intensity of the habit, or even surpass it …”).  If, however, the monk does not fast as much as usual in the week (say, he is excused by his abbot for the celebration of Easter, or due to some illness), then he will find it more difficult to “get back on the train”  (“If … the act falls short of the intensity of the habit, such an act [disposes] … to a lessening thereof”).

Considering this analysis in light of the aforementioned notion of limited willpower, a certain marriage of ancient and modern ideas seems possible.  It may well be true that, if we must always grunt through our chores in a duty-driven, stereotypically Kantian fashion, we will find ourselves inevitably running out of steam.  To build a good habit (of fasting, or skipping the donuts, or holding our tongue and horn on the highway, or working without intermission) is indeed difficult, and requires great and as it were active exercise of willpower; and of willpower in this sense, we are perhaps in limited supply.  But it does not follow that we ought therefore to resign ourselves to daily mediocrity; for to exercise a good habit in proportion to its existing intensity is far less difficult than to build up the habit in the first place.  That is why, as Aristotle observed, the incontinent man has more difficulty doing good than the virtuous man: because the incontinent man has not the habits that the virtuous man does.  And that is why modern, secular self-help types recommend working on one good habit at a time: because in that fashion it is possible to actually master actions rather than muscle through them every time they are performed.  And of course, as more and more good habits are gained in this fashion, the exercise of the will itself becomes a habit, so that eventually even the initial problem of limited willpower becomes itself moot.

The repercussions of this for the abuse scandal seem rather obvious, but I will state them anyway.  The problem in the priesthood is not so much that priests are required to be celibate as that there is not enough stress on celibacy and the sort of self-restraint and self-discipline that supports celibacy.  To put it more concretely, the solution (humanly speaking) is not married priests but more priests who fast, who practice voluntary poverty, who pray before the Blessed Sacrament, etc.

And mutatis mutandis for the rest of us.